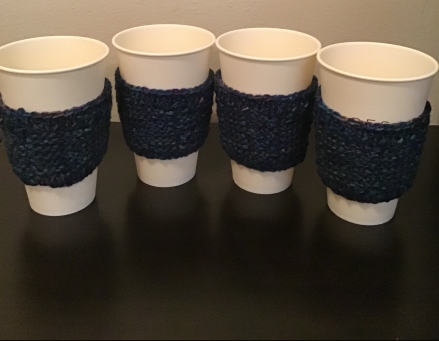 I recently finished these gorgeous mug cozies and sent them straight to my Etsy shop! Thanks to some wonderful family and friemily they’re already almost sold out! I’ve noticed that lately I have been on a huge braid kick, and this was no exception. The only downside is that because these are knit in a colorful yarn, with two strands held together, the pattern doesn’t come out nearly as much as I would have liked. I was able to share the pattern with a friend, who knit in a single strand with a uniform color, and this is what it looks like if you do that.

The yarn I chose is a yarn I’ve had in my stash for forever. It was one of, if not the first, yarn I purchased with the intention of making something for my Etsy shop. However, every time I started knitting with it I just wanted to barf at how the color came out. It was such a relief to find something that the yarn weight worked perfectly for and the color was actually quite gorgeous.

Most of the patterns that I get, I grab from A Second Treasury of Knitting Patterns (s/o to then boyfriend, now hubby for winning my birthday/Christmas 2016/2015). I almost always make some modifications, though. I have also started this headband, but because I didn’t want the braid to go around the length of the headband, I had to sit down and figure out (a) how to convert the pattern to knit in the round, (b1) how to alter the number of stitches for width, (b2) how to make the repeat look seamless, rather than like an edge. I restarted this project three times before I was finally able to get it down. But now, I have one completed headband and I am working on a second today. The dark taupe headbands will hopefully be up in the shop by the ned of this upcoming snowy weekend, and then I’ll get to work on another color. 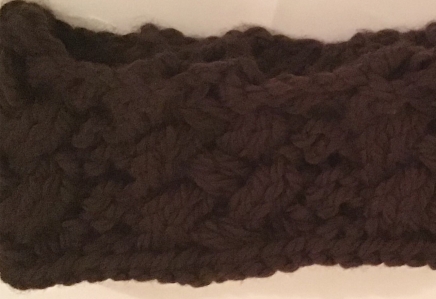 My Ravenclaw scarf is coming along great! I abandoned the double knitting idea and I am so glad. I have been able to power through this project as a result. It’s a 300 row pattern, and I am on row 225. I set a goal for myself to be done with this by January 27, which is exactly 364 days since I placed the online order (Webs Yarn Store) for this yarn. Even though we didn’t get the yarn and the pattern set until February, I personally felt like I really needed to do this for myself. I also had a wedding in there, and my dear friend was kind enough to see my stress and tell me to take a break from his project. Also, I totally lied. I set the goal because I restarted on December 27, I had no idea I purchased the yarn on January 28, 2018 until I started my taxes! (But admit it, the former explanation is way better, isn’t it?)

Are you binding off or casting on right now? Are there any patterns that you’re finding you are completely drawn to? Let me know in the comments, follow my Instagram page, and my Etsy shop!