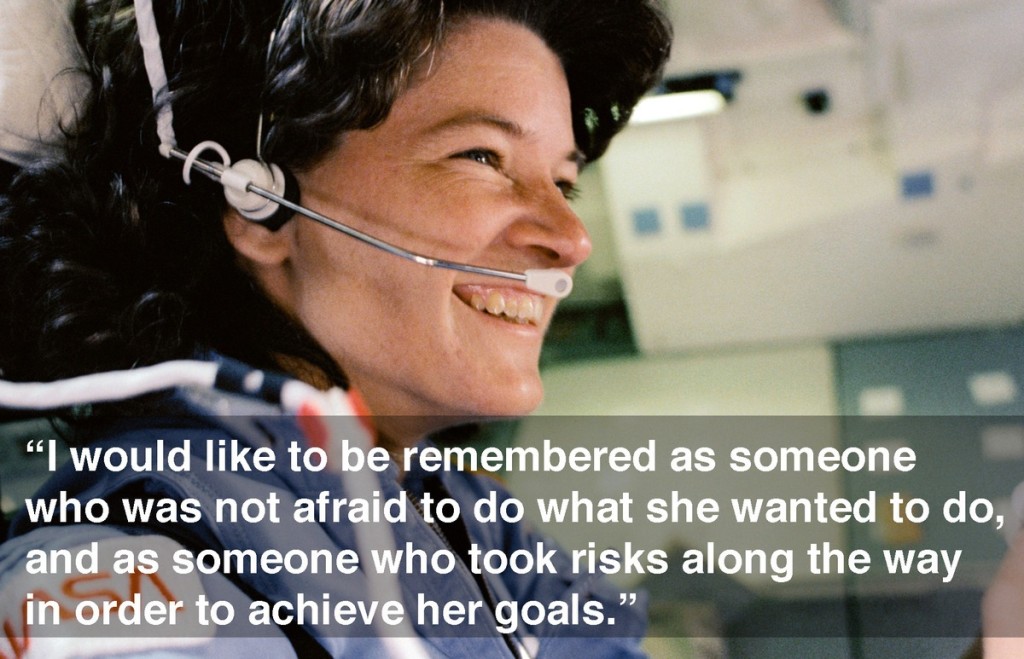 There is barely an American today who does not hear Challenger and think “space shuttle.” However, I bet there are a lot, if not most, that do not think, “that’s the one made Sally Ride the youngest American and the first American woman to enter space in 1983.” After the tragic explosion in 1986, which is probably what comes to mind first, Sally Ride was named the first director of NASA’s Office of Exploration.

Other accomplishments by Sally Ride include co-founding Sally Ride Science with Dr. Tam O’Shaughnessy and Dr. Karen Hammer with a mission of promoting STEM literacy and motivating female and/or minority students to stick with STEM. What is absolutely awesome to me about this is simple: when I was a kid and interested in science I tried to hide it. I pretended I wasn’t good at things (although sixth grade science was harder than anything else I remember struggling through, including organic chemistry). What Ride and her friends chose to do was make it okay for people who are underrepresented in science, and often discouraged from pursuing science, to do it anyway.

On top of that, Ride and O’Shaughnessy published a series of children’s books together about space. What better way to get excited about the world than reading about it from two brilliant women? Additionally, it was announced in her obituary that Ride and O’Shaughnessy were lifetime partners rather than just good friends. This absolutely broke my heart that somebody so iconic to me growing up had to hide something so true to her core for her entire life. It has been argued that she was just a private person, which makes sense for hiding her battle with cancer, but to me, not hiding her true relationship. But, she isn’t here to defend herself, so I will stop speculating and just say that I still love you Dr. Sally Ride.

I remember when I learned who Sally Ride was in school, and I remember the woman who taught me. I remember being fascinated not that we as humans could travel in space, but we as women could travel in space. I was young, but not too young to know that women were behind men in careers. I was old enough to realize that it was a BFD for this woman to have gone into space in the 1980s. And now, as an adult, I realize how important she was for women everywhere- scientists of all levels from BS to PhD and the professoriate, astronauts, members of the LGBTQ+ community, and cancer fighters. Dr. Sally Ride has impacted the world and I hope she is never forgotten.