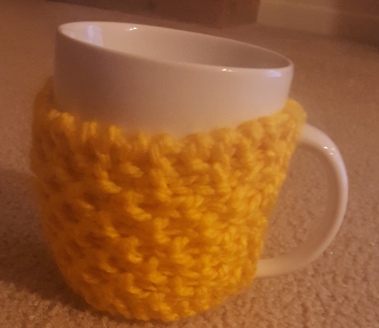 I found this pattern for a Bee Stitch Mug Cozy and thank goodness mine looks very much like the provided image (including the color- which was not planned). I grabbed some scrap yarn that I used for a birthday present earlier this year and figured I could not go wrong with a bright yellow. I made this to brighten up a plain white mug that I got for a Secret Santa gift (mug and box were also graciously filled with Hershey’s hugs and kisses). It took me about one quarter of football (that’s an accurate measure of time, right? It was the third quarter if that helps) to complete, once I figured out what the heck I was doing. Let’s first talk about some struggles.

I would do it again, and I like the bee stitch pattern, so I could see myself using it on other projects. It was a great learning experience, but I am also glad that it’s over.